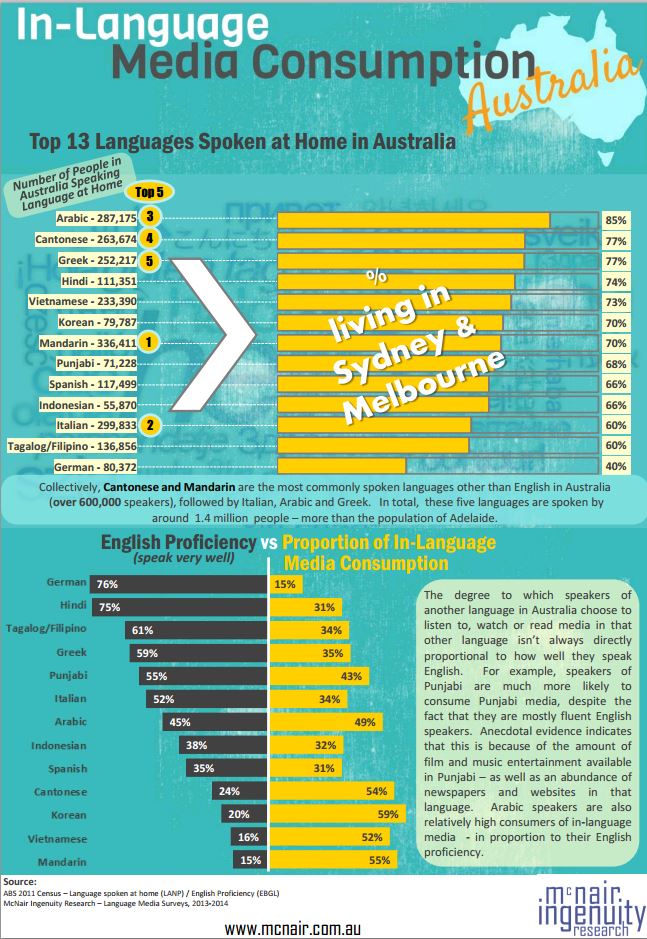 A recent survey by leading social research agency, McNair Ingenuity Research, has revealed that the propensity with which  the 4.62 million ethnic Australians speak their own language at home does not mirror their ability to speak English, nor is it proportionate with the amount of In-language media listened to, watched or read. 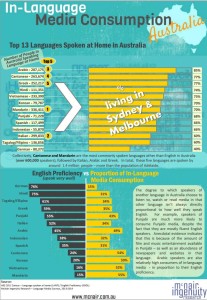 ‘The reason for this growing demand for In-language media is a cultural connection’ said lead researcher Matt Balogh. ‘Rather than a language barrier, it’s religious or cultural beliefs and traditions that are motivating media consumption, as well as the opportunity to access the variety of in-language content’ he said. ‘In addition, respondents speaking the top 5 languages are choosing to live in close knit urban communities, such as Sydney or Melbourne, surrounded by their own culture and where they are able to keep traditions alive’, he said.

‘This is the effect of the Indian love of Bollywood movies, or in the case of the Islamic Arabic community, because the content supports their faith,’ Balogh said.

By contrast, the survey revealed Germans in Australia speak their own language the least, with over 76% highly proficient in English and only 15% consuming media in German. Germans were also least likely to maintain the cultural traditions from their country of origin.

Lee Hubber, Director of Spots and Space, a specialist In-language media representative company, said of findings ‘this research proves that the desire for migrants to connect with their culture becomes stronger the longer they are settled in Australia.  That is why multi-cultural media, across all platforms, has continued to grow strongly in recent years.  Marketers need to be communicating via In-language media if they want to effectively tap into multi-cultural Australia and really create an emotional connection with those audiences.’ he said.

Survey Source:The McNair Ingenuity Research In-language Survey findings come from 13 telephone surveys conducted between 2011 and 2014, including over 5,200 speakers of languages other than English.

For further information or an interview with